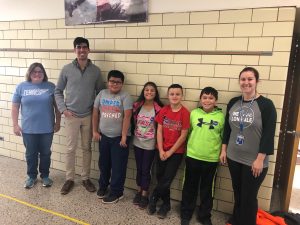 Students and teachers line up for a picture with TSGC Outreach Coordinator Robert Jacobsen.

The space sciences offer everyone a chance to learn, be creative, and have fun.  This is especially true for students and teachers at Lonsdale Elementary in Knoxville, TN.  As part of the FIRST Lego League robotics competition, the Lonsdale team is building and programming robots to complete tasks analogous to those that might be encountered in future space missions.  FIRST is a non-profit organization that operates worldwide and promotes science, technology, and engineering skills in students.  This years challenge is called “Into Orbit.”

As part of their competition, students must present a solution to a problem faced by humans during long duration space exploration.  The Lonsdale team identified dirty clothes as a likely problem for humans in space.  To identify a solution to this problem, FIRST teams are encouraged to reach out to local experts.  That’s when Lonsdale teacher Rachel Babelay reached out.  Dr. Robert Jacobsen, the TSGC Outreach Coordinator, joined the Lonsdale team one Saturday in November to discuss their questions and ideas.  Of his visit, Robert said, “We got to talk a lot about water on Mars and how it needs to be melted before it can be used for drinking or washing clothes. The students have a lot of enthusiasm and I was surprise by their knowledge of planetary environments, and travel times. Their robot is really cool too.” 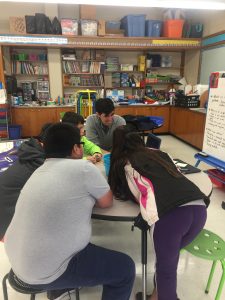 Robert and the students watch a video showing all the tasks and challenges in the upcoming Lego competition.

The flagship campus of the University of Tennessee System and partner in the Tennessee Transfer Pathway.